When Google released Estimated Total Conversion (ETC), the goal was to get a more accurate picture of what your ads are driving. The reason is because the world is so multi-dimensional — someone might search and but rather than buy something on your website, they will download your application, call your store, scan a barcode, and so on. ETC allows Google to track your ads while attempting to account for other types of traffic or communication with your business that people may have.

What has become clear is that the real world and the online world have become practically interconnected. Online research directly influence an individuals in-person shopping preferences and purchases, and vise-versa. To add on to that, Google says that 32% of customers used a location-based search ad to make a purchase in person. If you have a small business, especially with any retail sales, it’s important that you start delivering such ads before a majority of purchases are done with the help of the web.

Because people are now constantly connected, whether on their computer, tablets, or phone, business activities happen at all times, rather than your traditional business hours. Google’s research of consumer behavior led them to say that 70% of consumers who use ad features want location information. If you have products, they want to know how many is at the store closest to them. This new release is allowing you to enhance your marketing plan and target consumers who are interested, and not wasting money or resources on those that aren’t.

PetSmart has been attempting to monitor this type of data for their websites over the last year. With it, they were able to determine that 10-18% of their clicks led to actual store visits. That’s why they are specifically increasing their location-based ad’s and marketing, allowing them to maximize their conversion rate. You can see an example of a PetSmart return here: 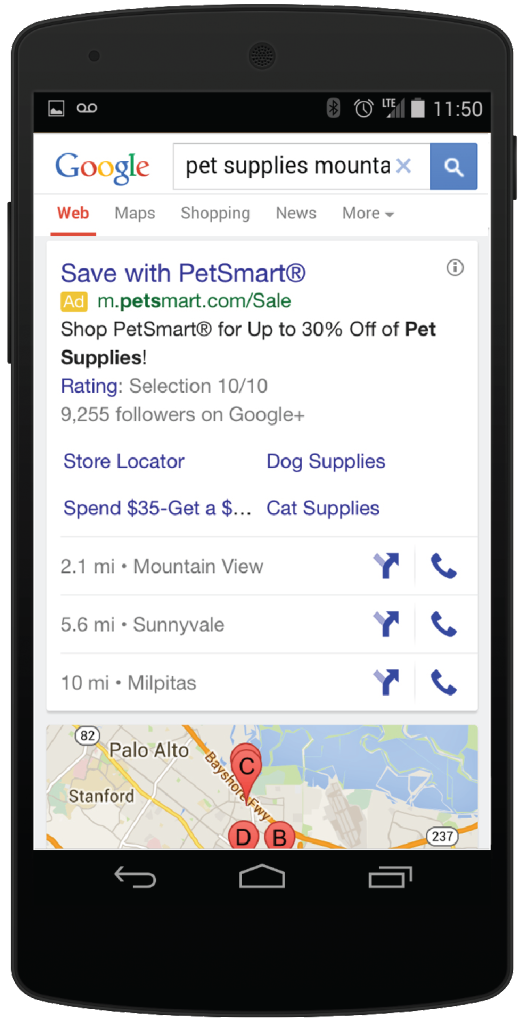 Meanwhile, Office Depot has 2,000 retail locations around the world and they began using the insights data to figure out specifically what people are going after what products in which locations. This helps local stores with their specific advertisement platform, being targeted rather than generic advertisements that may not be as effective in one location or another. For example, someone in rural Alabama won’t be as eager to purchase eco-friendly printing paper at a discounted rate than someone in Oregon. So it would be a waste of resources to run such an ad in Alabama.  An example of the differences between the office depot ads can be seen here:

Google has been able to design this new insights measurement while keeping data secure. No one’s actual location is ever given to a company (or anybody!). The measurements are done with a specific population that keep location history on their devices and allows Google to collect data, and then statistical methods are used to apply the value to general population. Overtime, their methodology will become more accurate and the information more useful.