In the fall of 2013 Google launched a program called Local Inventory Ads, which allows stores to display their inventory as ads to potential customers, even if they aren’t selling online.  Due to the popularity and success of the program, they have recently announced that they are expanding this program to additional countries, and also adding more formatting options.

The program allows businesses to display a lot of information about the products that they have available in their stores.  Unlike traditional ads, these local inventory ads actually tell potential buyers the price and that it is currently available in a set store.  You can see an example of these ads in the image here: 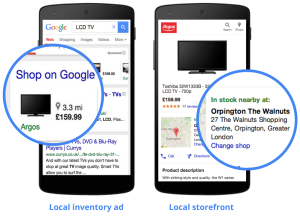 According to the announcement, business owners can now start displaying local inventory ads in the UK, France, Germany, Japan and Australia.  There is no word on whether the program will continue to expand to other countries, but it seems very likely.  The program was originally only available in the US.

In addition to allowing these ads to be used in additional countries, Google is expanding the program to allow you to display the ads on desktop devices.  Before it was only optimized for mobile devices such as tablets and smartphones.  The idea behind that was likely that people out and about could see the ads for stores that were nearby. Expanding the program to full desktops shows that this is an advertising option that has real potential. 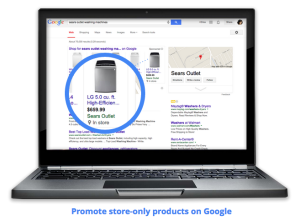 This program has had many incremental updates over the year that it has been around, and it has really become an excellent resource for savvy businesses that have taken advantage of it.  For example, you can enter the number of items you have in stock, and even ramp up your ad spend during the weeks just before Christmas or other holidays to reflect sales or other promotions.

In the announcement from google, they shared a statistic that shows just how powerful these ads can be.  It said, “83% of shoppers would be more likely to visit a store if they could check the availability of an item online beforehand.”  This data was collected from a survey they performed, and really shows that this could be a powerful addition to the marketing campaign of any local business looking to harness the power of the internet.